Setting up an IDE

This section is about setting up Code::Blocks for developing Wii U Homebrew using the devkitPPC toolchain.

If you didn’t set up devkitPPC already, you may want to follow this tutorial. You should’ve installed the required libraries for plugin development by now as well. If not, check out this page.

Code::Blocks is a free IDE and can be downloaded here. Install it according to the Code::Blocks homepage.

Setting up the compiler

For Wii U homebrew we generally use custom makefiles but Code::Blocks still needs to have a valid compiler/toolchain set. Using this tutorial we are overriding an existing compiler setting. If you are using it for non Wii U projects, make sure to make a backup/copy of the settings.
Once you have opened Code::Blocks, you can access the compiler options menu via Settings -> Compiler... on the menu bar.

An example configuration can be found here:

Now you can turn any existing project into a Code::Blocks project by following this tutorial.

Alternatively, you can use the Code::Blocks template to create a new plugin project from the scratch. A tutorial for this can be found here.

CLion is a smart cross-platform IDE for C and C++ development.

See the Code::Blocks preparations above.

Setting up the compiler

In CLion you should setup a supported gcc like C/C++ compiler toolchain (not devkitPro!). For Linux this should be pre-installed. If not, you may want to follow this guide. On Windows you need to install something like WSL (recommended) or MinGW/Cygwin. Depending on which toolchain you chose, you need to configure it as the default toolchain in CLion under File -> Settings -> Build, Execution, Deployment -> Toolchains: 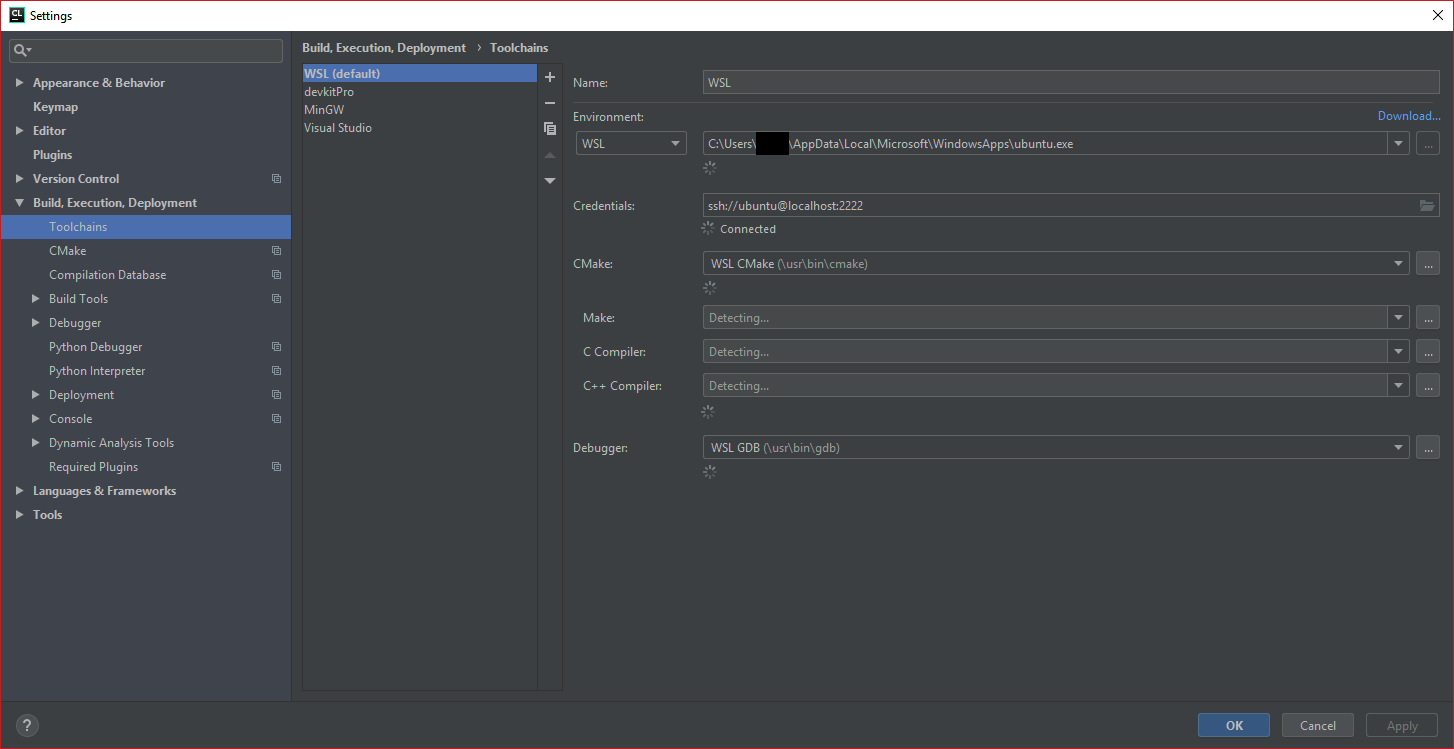 Please note that this toolchain is only needed to provide code inspections on library functions. We’re of course still using devkitPro for compiling the plugin.

You can now use the Code::Blocks template to open in CLion by going to File -> Open... and choosing the project’s root directory. Delete the windows_template.cbp file since it’s not needed.

If you also want to get code inspections on wut or wups functions (highly recommended), you need to create a respective CMakeLists.txt to use CLion’s features to their fullest possible potential:

Please note that you may need to adapt the WUT and WUPS variable file paths if they are different than the ones specified above.

Compiling is still done using the command line/terminal and running the make command. CLion has a built-in Terminal feature for this. Click on View -> Tool Windows -> Terminal to open a Terminal inside CLion:

If you need some visual aid, I even created a video showing the whole plugin template and compilation setup here.